There’s no reason to use incandescent or sodium vapor flood lights in outdoor lighting today. Such lamps produce a dim yellow light which, while sufficient for basic visibility, is terrible for security. In comparison, LED flood lights offer much better safety and security features.

LED technology has a big advantage over HID because it uses diodes rather than heated elements. These diodes have an efficiency exceeding 90% and emit an intense, high-quality light that is perfect for illumination at night.

By being highly energy efficient, LED floodlights will save clients a lot of money in operational costs.

Efficiency is only one of the many benefits of LED flood lights, though. When it comes to safety and security, LEDs are becoming the go-to technology for outdoor lighting because they have:

As a contractor, clients will rely on you to recommend ideal but cost-effective lighting solutions that meet their needs. Here are four of the best safety and security benefits of LED flood lights that make them perfect for any outdoor lighting project.

Compare the two night scenes below. 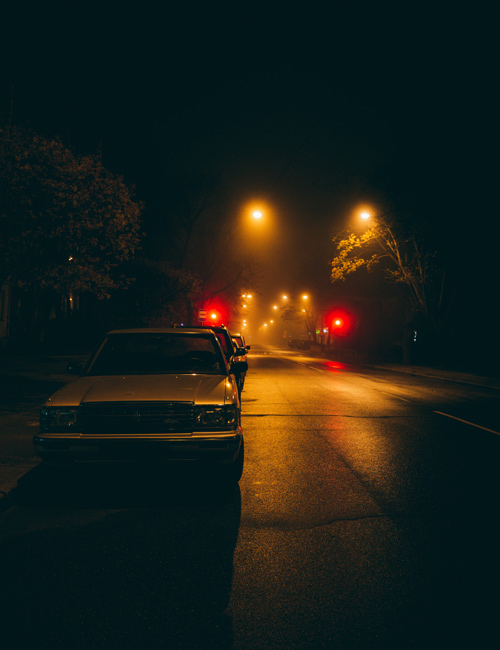 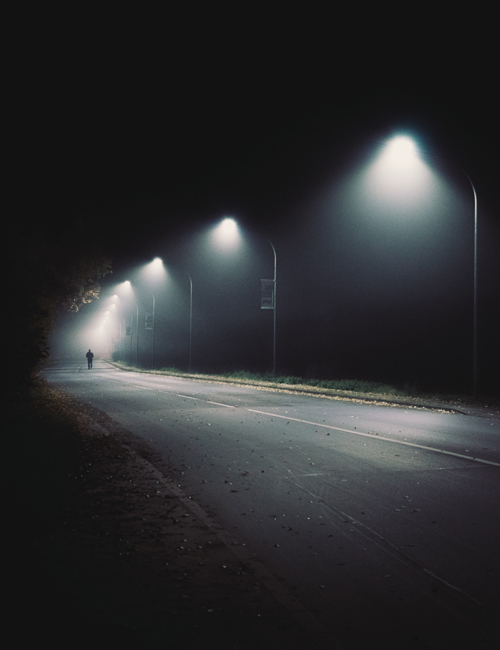 Just from the images above, you can tell that there is a world of difference between LED outdoor lights and the yellow light of older technology.

There are three reasons why LED floodlights provide better illumination.

HID flood lights are one of the most popular options today because of their high light intensity, but LEDs compare very favorably with them.

Modern LED flood lights produce 100–150 lumens per watt, whereas HIDs manage 100 lumens per watt and depreciate over time. Thus, an LED with a power rating of 200 W can produce up to 30,000 lumens, which is plenty of light for both commercial and industrial applications. 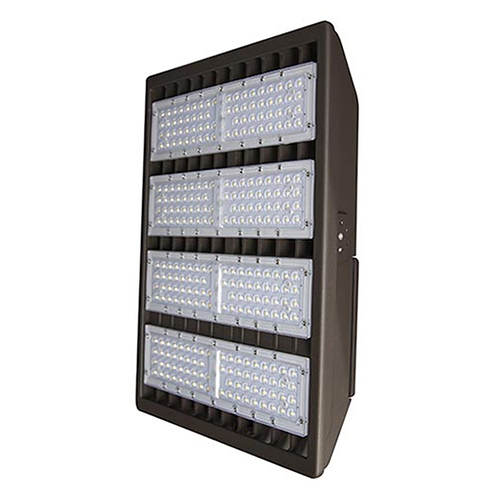 
The table below compares the average lumen output and wattage of some popular flood lights. We used data from a Philips product guide to get this information.

As you can see, LEDs save a lot of power compared to HIDs. Even better, LEDs waste very little light. While approximately 30% of the light produced by HID lamps is wasted as invisible infrared and UV radiation, LEDs produce almost all visible light.

Expert Tip: This nonlinear comparison is why commercial lights are no longer rated by wattage alone. LEDs produce much more light for a fraction of the power rating of an equivalent HID lamp.

Older light technologies, such as low-pressure lamps, produce monochromatic light, which provides poor visibility at night. By comparison, LED light covers a broader spectrum, producing light that is much more similar to sunlight.

The color temperature of light measures how warm or cool the light appears. It is presented in degrees Kelvin from 1,000K to 10,000K, with sunlight clocking in between 3,000K (sunlight and sunset) to 6,500K (daytime sun).

LEDs cover a much wider range of this scale, from 2,200K to over 6,000K. This enables LED lights to be clearer, have more contrast, and be more welcoming.

LED lights also have a higher color rendering index (CRI). CRI is a factor that indicates how much color information light provides when it illuminates a surface. Sunlight has the maximum CRI value of 100, with LEDs having a rating of 90 or higher.

By comparison, high-pressure sodium and fluorescent lamps only manage a CRI of up to 65, while metal halide lamps can reach a rating of up to 60. HID lamps can reach numbers of 90 or higher, but their light quality depreciates over time.

With better color rendering and temperature, LED lights provide better visibility even at long distances. Both humans and security cameras can distinguish faces from a further distance with LED security lighting, which is crucial for security and safety.

A brightly lit facility is a deterrent to criminals and burglars. People with bad intentions seek dark entrances and exits where they can move undetected. With LED flood lights positioned to eliminate dark spots, you can ensure a high level of safety.

Take a look at the dark parking garage below lit with poor fluorescent lighting. LED flood lights would make a huge difference here. 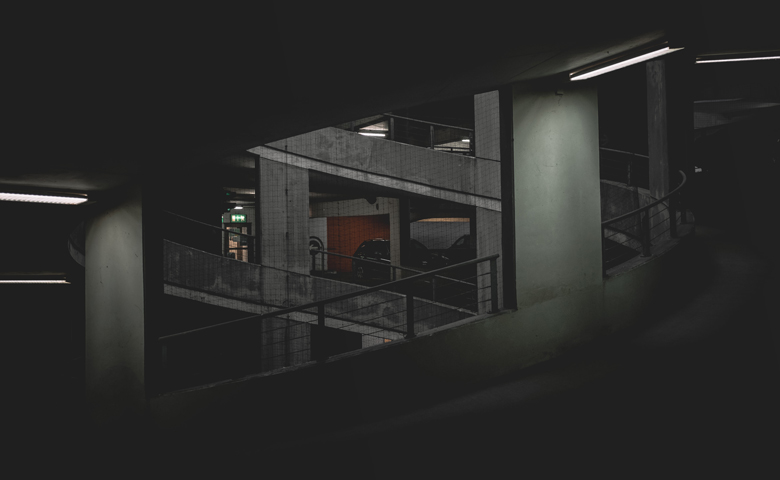 However, lighting is not enough to secure a facility. Other features, such as cameras and alarms, are also necessary for the best security. LED flood lights work very well with other security features, as demonstrated in these applications:

All of these functions are possible because LED flood lights can cycle on and off instantly. They don’t require a warm-up time, do not flicker, and continuous cycling doesn’t reduce their service life.

Take a look at how UC Davis retrofitted its campus with LED lighting and integrated it with modern control solutions to achieve an 89% reduction in energy costs.

In industrial and commercial facilities where safety is a primary concern, LED flood lights are the primary choice for lighting designers. One of the main reasons for this is that LED fixtures remain relatively cool, even during continuous operation.

Unlike HID and fluorescent lamps which use a white-hot element to emit light, LEDs produce very little waste heat. Most of the heat produced by LED lights comes from LED drivers and other electronic components, which can be taken care of with thermal control features.

LED lights designed for hazardous locations can be used in gas stations, gas and painting facilities, and other areas where excess heat is a cause for concern.

By comparison, incandescent and halogen lamps can get so hot that they can ignite flammable materials just by touching them. 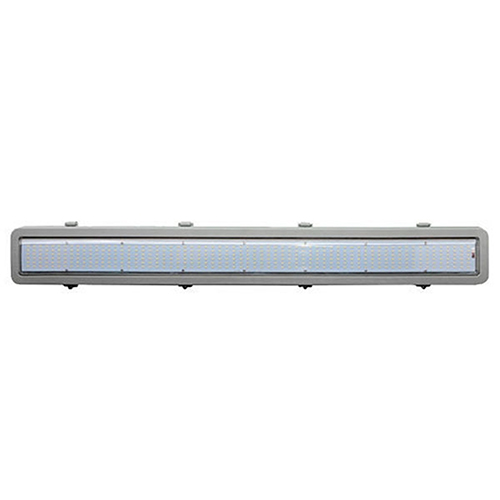 If the bulbs of these traditional lights break for any reason, they can release these toxic substances. This is also why dead bulbs require specialized disposal techniques.

Today, security lighting has to abide by increasingly stringent regulations. These laws exist in many states and cities and include dark sky regulations and various outdoor lighting codes to control light trespass.

For example, the full cut-off LED light below ensures light is dispersed only downwards and ahead (forward throw), so it doesn’t annoy neighbors or pollute the night sky. 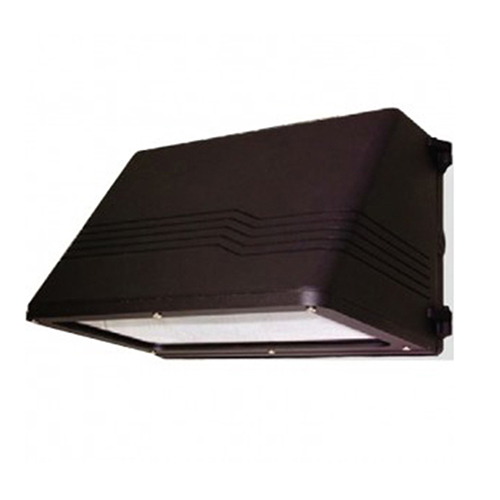 By using LED flood lights, you will also comply with green energy regulations. Many states now have laws about what type of lights can be used for outdoor lighting. With LEDs, you can find the ideal balance between minimum lighting requirements and green energy laws.

As an electrical or general contractor, it can be difficult to meet client expectations without overstepping budget restrictions. With modern LED lights, paired with sophisticated control systems, you can enhance security and cut operational costs.

For example, your flood lights no longer have to operate at full power through the night. As Electrical Contractor Magazine puts it,

"Eternal vigilance … is less necessary if the lighting is good."
-ECMagazine

This is where the team at RelightDepot comes in. With our extensive knowledge of the construction industry and modern lighting solutions, we can help you pick the most affordable lighting solutions to meet your project specifications.

More importantly, we will advise you on available rebates and other financial incentives that can help you switch to efficient LED security lighting. If that sounds like a win-win to you, give us a call at 888-548-6387 for consultations and to hear about our extensive supply of security floodlights.